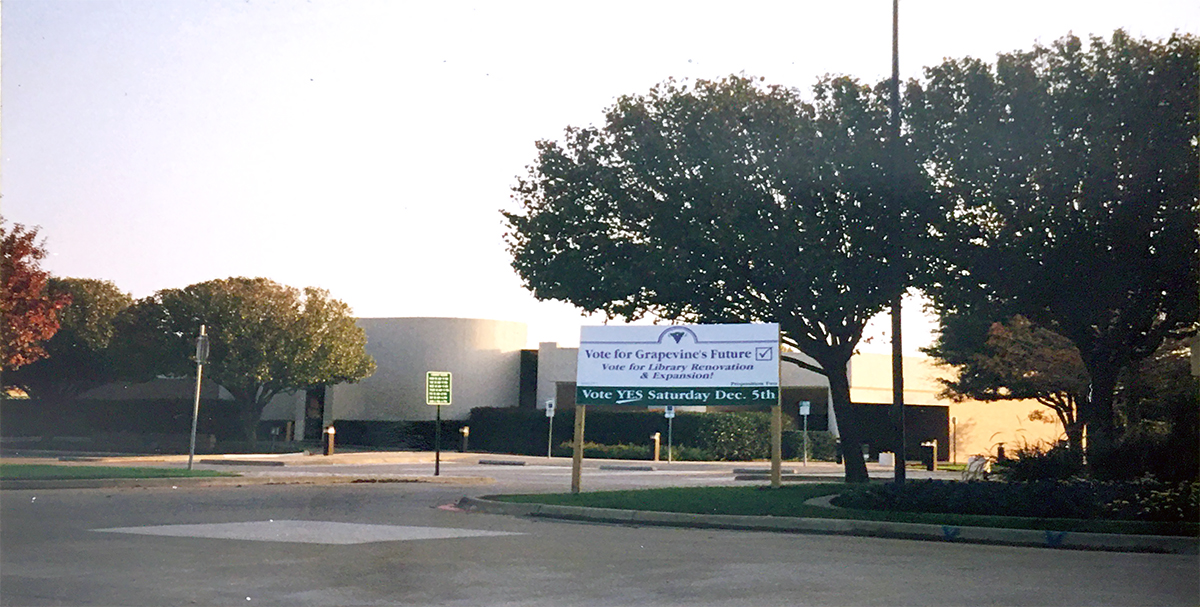 Grapevine’s population grew to 31,836 in 1991. Library material holdings grew to 92,797 and annual circulation to 357,855. In February, Mrs. Marie Canning started part-time in Circulation. She eventually became full-time Acquisitions Assistant. In April, Grapevine Public Library’s automation system was upgraded from OCR labels and wands to bar code labels and laser guns. The re-labeling of over sixty thousand library materials and preparation of 30,000 borrower cards was accomplished in sixteen weeks with the help of eighty valued volunteers without closing the library.

The Friends of the Library donated a Xerox plain-paper fax/copier, a Magazine Article Summaries (MAS) CD-ROM index to replace InfoTrac, and a plain-paper Minolta RP 605Z microfilm reader/printer from the proceeds of the annual Christmas ornament sale. Skaggs Alpha Beta cash register receipts worth two-hundred seventy-three thousand dollars collected by the public enabled the purchase of a MacIntosh computer and software. Due to community support and Burrus Supermarkets, 30,700 Campbell Soup labels provided funds for a portable public address system and three audiocassette players. The City funded the purchase of an OCD book copier.

In May the City of Southlake and the City of Grapevine entered into an interlocal agreement (similar to Colleyville) where Southlake would provide funds to purchase books to be housed and used at the Grapevine Public Library until a Southlake library became available. Children’s Librarian Kristi Kirchoff moved to Corpus Christi at the end of May after nine years as Children’s Librarian. In October the library started publishing a monthly newsletter titled “Library Link.” In November, St. Francis Catholic Church Community Fest presented the Library with a check for two thousand seven hundred dollars to help purchase equipment for expanded use of the magazine index.

Council passed an ordinance in September that implemented a twenty-five-dollar annual non-resident fee for persons living outside the interlocal agreement area who wanted to check out materials from the library, effective October 1. The library had been charging out-of-county residents since 1982, but Tarrant County residents had gotten a free ride because the library used to get some funding from the Tarrant County Commissioners Court. In November, Council entered into a reciprocal library borrowing agreement with the City of Euless to jointly waive non-resident fees for their respective citizens.

In April 1993, National Library Week was celebrated with a Library Open House honoring the seventieth anniversary of library service in Grapevine, and recognizing the forty volunteers who helped the library to maintain and deliver a variety of quality services. Paragon Cable sponsored the end-of-summer reading club party with storybook characters Peter Rabbit and Madeline being present to greet the eager readers. Paragon also presented the library with a videocassette recorder, color television, headphones, closed-caption decoder, videocassettes, and a set of Peter Rabbit and Madeline books. Grapevine Name Droppers genealogy group, organized by local genealogist Mrs. Frances Malcolm, began meeting in August on the second Monday of each month. Grapevine’s population stood at 34,312.

By 1994, the population had risen to 35,749. In the wake of rising library usage, requests for more services, and increased space needs, Council, upon request from the Grapevine Library Board, engaged Lee B. Brawner and Associates, Library Consultants: Buildings and Planning, to conduct a services and space needs assessment. The study included recommendations to support library service through the year 2015.

In December 1995, the Library presented a certificate of appreciation to St. Francis Catholic Church for its support of library services. The parish donated three thousand dollars from its annual community festival toward the purchase of a new copy machine for library patrons. In June 1996 Grapevine was voted Best Library in Northeast Tarrant Co.

During the presentation of the of the proposed library expansion project in August 1997, the Assistant City Manager reviewed the increased usage of the library from the original building construction in 1986 to 1996:

The proposal included remodeling of the existing fifteen thousand-square-foot facility and the addition of thirty-one thousand square feet, increasing seating capacity from seventy-four to three hundred eight, and increasing the parking spaces from eighty-three to one hundred fifty three.

In December 1997, the City Manager briefed Council regarding a possible tri-city library composed of Grapevine, Colleyville, and Southlake. Since early 1996, these cities had been discussing the possibility of developing a library that could serve the long-term interests of citizens from all three cities. The main goals for the City of Grapevine during the discussions were to improve the library facilities and services, to maintain administrative control, to receive just compensation for materials and equipment, and to see that the library remained in Grapevine. Discussion ensued relative to a possible location within the city limits of Grapevine on State Highway 26, possibly including the Grapevine-Colleyville Independent School District, structure of the Board of Directors, their by-laws, and components of an interlocal agreement for the three cities. Council took no action.

The population in 1998 was 40,745, and many residents had been interested in accessing information electronically. In February, Council voted to accept $49,975 from the state through a grant from the Telecommunications Infrastructure Fund (TIF) in order for the library to provide access to the World Wide Web. The Library purchased four workstations, two printers, and a T1 line connection. The cost included installation and training. In June the library established its own web site on the Internet. The Library’s seventy-fifth anniversary celebration was held in March.

The Library celebrates 75 years of service to the community.

In August, Council voted to cancel its library agreement with Colleyville and Southlake after a proposal for a tri-city library did not work out. Colleyville and Southlake residents then had to pay an annual twenty-five-dollar non-resident fee since their cities no longer had an interlocal agreement with Grapevine. The focus turned to expanding the current library due to high usage of its one-hundred thousand total holdings. In 1997-98, library patrons conducted five hundred thousand transactions. The $6.7 million bond issue passed in December, which would allow expansion of the library to fifty-three thousand square feet. It included a children’s space, an enclosed genealogy room, an enclosed periodical room, a teen area, study rooms, a twelve-station computer room, a reference area with an additional twelve PCs, a drive-up window and book drop, and more general library space, as well as more checkout points. Interior colors were to be purple and green, but different areas had different color schemes. The original building was gutted, renovated, and connected to the new construction. In June 1998, the Library was again voted Best Library in Northeast Tarrant Co.

Grapevine’s population in 1999 was 42,106. Bids for the expansion project were sent out in January 1999. In June, Council approved and authorized an architectural/engineering design services contract for the expansion and renovation of the library to Phillips Swager Associates, Inc. for $528,950. In October, Council approved an interlocal agreement between Southlake and Grapevine, wherein Southlake residents would pay a twenty-five-dollar annual fee to obtain a Grapevine library card, limited to one per family, with multiple users within the family. Horizon, a new computer system, was installed that replaced the initial home-grown system. New library cards were also issued.

By the year 2000, the population had risen to 42,111. An average of seventeen thousand to eighteen thousand people were using the library each month that year; the number of materials checked out increased about twelve percent in 2000. In February, the library web site was launched that included information about children’s and adult programs, an events calendar, information on researching genealogy, and updates on work to remodel and expand the building by 2001. Patrons were able to search the catalog and re-check materials online. Books on CD were added to the collection.

In April, Council awarded the construction contract for the library expansion to T. W. Foster, Inc. for $4,624,547. The groundbreaking ceremony for the expansion of the library was held on May 2, 2000. The foundation was poured in October. Council authorized the purchase of a two-hundred thousand-dollar radio frequency detection system from Checkpoint Systems, Inc. to help prevent material theft. In December, Council approved a resolution for the purchase of library furniture not to exceed $74,119.74 through a contract established by the General Services Administration.

By 2001, Grapevine’s population totaled 42,456. Between May 28 and June 12, the Library closed and moved into the thirty-eight-thousand-square-foot addition. Library hours changed to 9 a.m. to 9 p.m. Monday through Thursday, 9 a.m. to 6 p.m. on Friday and Saturday, and 2 p.m. to 6 p.m. on Sunday. In June, the new Checkpoint Systems self-check system became operational, allowing patrons to check out books on their own. Microchips were embedded in library materials. When these items were scanned by the self-check, they were recorded in the system as being checked out by an individual, or checked in by library staff.

The Library closed  from September 26 to October 10 in order to move back into remodeled area. In November, the Grand Opening of the expanded library and dedication of the “Who Hath A Book” sculpture took place. The drive-up window, express checkout, and telephone circulation were ready for business.