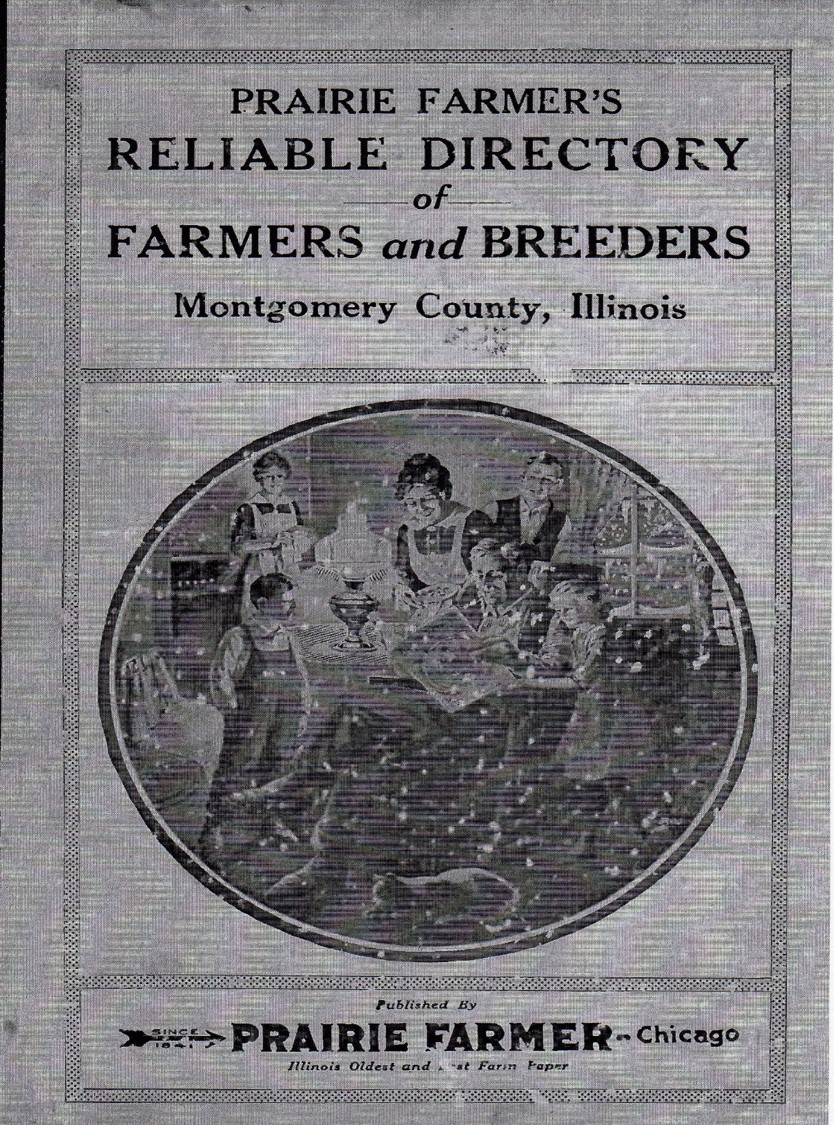 Directories are much like today’s telephone books except that they offer a better panorama or “bird’s-eye view” into the makeup of a community or an organization during a particular time period. They offer an abundance of terrific clues and research tips about finding people from the past. Much of this information cannot be found elsewhere. While city directories are a popular tool for finding urban ancestors, researchers should keep in mind that there are farm directories geared toward the rural population. Like city directories, their purpose was to be a tool for businessmen. Not only do farm directories provide valuable family information—especially for those years in between the federal censuses—they also offer a kind of “snapshot” of life on the family farm.

Depending on the publisher, you may find various types of information in a farm or rural directory. There were several publishers of these directories, and in today’s blog, we’ll look at some samples of them.

Many publishers produced farm directories from the mid-nineteenth through the mid-twentieth centuries. The Prairie Farmer’s Reliable Directory of Farmers and Breeders series out of Chicago was one of the most popular publications. The Prairie Farmer was a leading agricultural magazine and a champion of farmers’ rights founded by the Union Agricultural Society of Chicago. Directories were published covering various counties in Indiana, Illinois, and Wisconsin, but there are no records of exactly which ones were published.

Prairie Farmer directories built upon this basic information and, though their entries are still brief, provide a fantastic amount of data. Each entry includes:

Grapevine Library has some printed copies of Prairie Farmer directories for the states mentioned above. Several web sites contain digital copies. The Wisconsin Historical Society’s collection is under “County Histories.” Ancestry.com also has some – look under ‘Directories & Member Lists’ – and some USGenWeb county sites have digital or transcribed versions of these and other directories for their counties. Also, check FamilySearch, HathiTrust, Internet Archive, and Google Books. You’ll need to set up a free username and password to access images on FamilySearch.

Some directories also include the names of parents, siblings, in-laws, nieces, nephews, and grandchildren living in the home and occasionally give the farmer’s primary crop and names of any farm hands. Owners of purebred animals such as cattle, chickens, hogs, goats, ducks, and even bees are then listed by type of animal and breed. Later directories provided a listing of automobile owners and the makes of their vehicles as well as tractor owners and the makes they owned and even what type of silo a farmer possessed. A directory of county businesses is always included; as with modern directories, advertisements from local proprietors financed much of the publication costs and can be found throughout the volume.

Orange Judd was an American agricultural editor and publisher from New York. A graduate of Wesleyan University in 1847, he built the Orange Judd Hall of Natural Science there in 1871 and secured through his gifts the establishment of the first agricultural experiment station in the country. In 1853 he became joint editor and owner of the American Agriculturist, which he made into one of the leading farm papers in the country. The Orange Judd Publishing Co. also published directories of individuals and farms in many New York and Pennsylvania counties in the mid-19-teens. These directories not only included individuals engaged in farming but also those in related businesses. The directory, entitled The American Agriculturist Farm Directory and Reference Book, was organized as follows:

“The Rural Index (or Rural Guide) ‘Compass System’ Map and Localized Almanac, [County name] County, N.Y. for Merchants, Manufacturers, Professional Men and Public Officials” was published 1936-1939 for twenty-nine New York counties. They are a complete alphabetical listing of the heads of all rural families living outside villages, cities, and non-agricultural areas in these counties. The “Compass Address” was a ‘practical point from which to locate the farmer’s home’, and could differ from the postal address. Information included:

The second component of these registers is the Rural Register (sometimes called Farm Register) of All Farms of [County Name] County, New York, for Merchants, Manufacturers, and Professional Men. They were published by Rural Surveys, Inc. for twenty-nine counties in the state and were a directory of all of the farms in those counties. A few counties are available online at FamilySearch.

The third component is the Special Classified Rural Register which adds the number of persons living in each home and other information on each farm, such as farm classification (truck, fruit, poultry, cattle, sheep, etc.). It does not include the original Compass System map but is still highly useful as a straight directory. Copies of these registers are uncommon. The only digital version is for Niagara Co., 1939, at FamilySearch. No others were found online.

The Farm Journal Illustrated Directory was published in Philadelphia by Wilmer Atkinson during the 19-teens and early 1920s for states such as Ohio, Indiana, and Michigan and included:

The general farm directory information is very informative, but the supplemental data can prove as much of a gold mine. Be sure to look all through the directory to see if there are any pictures of your ancestors‛ homes, their livestock, or even your ancestors themselves. Some farm directories include brief histories of the county’s settlement and its early pioneers. Finally, check nearby city directories for farmers and others living in outlying areas. Residents of rural Allen Co., Indiana, for example, are listed in the back section of older Fort Wayne city directories.

You can find some of these at FamilySearch, Internet Archive, Ancestry.com, and Ancestry Library Edition (in-library only).

An example of a non-inclusive rural directory is A Directory of the Granges in North Carolina, 1877. It’s arranged alphabetically by county, then lists the grange, its master, secretary, and post office address. You can find a digital copy at the Internet Archive.

A directory of county businesses is always included in farm directories; as with modern directories, advertisements from local proprietors financed much of the publication costs and can be found throughout.

The Texas Stock Directory was likely the beginning of a series of volumes of cattle brands and their owners throughout Texas. Volume 1 is comprised of counties and brands of South Texas. The compilers – H. W. Jackson and Samuel A. Long – were working on Volume 2 when Long died of cholera in 1866, and the series was never finished. Volume 1 is digitized in Google Books and HathiTrust.

Farm and rural directories are rich resources for genealogical researchers whose ancestors might be found inside them. If your ancestors were in these places when the directories were published, seek out those publications. They will greatly enrich your family’s history.