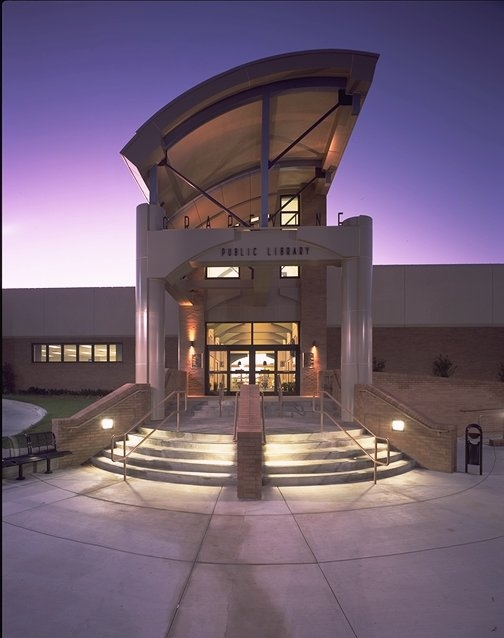 In 2002, Grapevine’s population reached 42,827. Since the grand opening of the expanded library in November 2001, more Grapevine citizens applied for library cards and visited the library to take advantage of the many new services a larger library was able to provide. The Children’s Department created My First Storytime, a one-on-one lap-sit program for babies from birth to eighteen months and their caregivers, began that year.

By 2003 the number of residents increased to 43,049. In March the library celebrated its eightieth anniversary with an open house. Final withdrawal of materials purchased by Colleyville for Colleyville and housed at Grapevine were made, since Colleyville would open its own library in November.

In January 2004, the library received a sixteen-thousand-dollar grant from Verizon to expand its English as a Second Language (ESL) program. In May the library installed a new color copier. In August, Dick Clark, long-time host of the television show American Bandstand, spoke at the library about the importance of both preventing and living with Type 2 diabetes and its associated complications. The first Artisan’s Marketplace was held in December, featuring many hand-crafted items created by local artisans. Proceeds for sales benefited the library. The population increased to 43,258.

In 2006, the population stood at 44,391. In January, Verizon made a ten-thousand-dollar literacy grant for new books and media materials to the Friends of the Grapevine Library. The Great Courses CD series was added in February. The Friends also granted nearly twelve thousand dollars to the library to pay for new services and programs, such as downloadable audiobooks, and homework assistance through Tutor.com in April. In June and July, Grapevine was one of eleven Northeast Tarrant Co. libraries that participated in the One Book, One Community program promoted by the American Library Association. This program received a three-thousand dollar grant from the Texas State Library and Archives Commission Texas Reads program to buy materials. Participating Northeast Tarrant Co. librarians chose Isaac’s Storm: A Man, a Time, and the Deadliest Hurricane in History, by Erik Larsen. Residents of participating cities were invited to share the same experience through reading the same book. In October, downloadable audiobooks became available through the library’s Overdrive subscription service.

Significant changes occurred at the library during 2007. In January, electronic books were added to the catalog. A major national economic downturn that year resulted in reduced hours for summer, beginning in June. The library opened at 10 a.m. and closed at 8 p.m. Monday through Thursday, and opened on Saturday at 10 a.m. and closed at 5 p.m. Sunday hours were unaffected. In September it began closing at 9 p.m. Monday through Thursday but still opened at 10 a.m. Saturday hours remained 10 a.m. to 5 p.m.

In August, Council voted unanimously to end the city’s sixteen-year-old reciprocal borrowing agreement with Euless Public Library, effective October 1. Also in October, the due dates for checked-out items were changed from two weeks to three weeks. In November, Council approved $15,344 to purchase an Intelligent Library System for self check-out from Checkpoint Systems, Inc. after two years of library testing. Verizon gave an $11,140 grant to the Friends for four early literacy computers, equipped with thirty-five educational software packages representing seven curricular areas created by AWE Learning to be installed in the Children’s Room.

In March 2008 the library celebrated its eighty-fifth anniversary with additional programming provided by funds from Friends of the Library. In August , Overdrive was added as a downloadable audiobook service. Four new databases, accessible remotely from home, were made available in October.

Tumble Books, an on-line collection of read-along and audio books for emergent, struggling, or advanced readers, was added to the Children’s Department in May 2009, courtesy of donations from the Grapevine Heritage Lions Club and the Currie Family Foundation. In October, the library added WiFi to accommodate laptops and other portable devices. In November, on-line foreign language instruction became available through Mango Languages, a self-paced interactive way to learn various world languages.

In September 2010 the library added a Saturday story time and broke out an educational resource collection for parents and teachers to use in the classroom and for parents to home school their children or supplement classroom lessons. A new adult book club, Entwined Minds, started meeting monthly beginning in October. The library’s volunteer program, Grapevine’s Important Volunteer Effort, celebrated twenty-five years of volunteer service at its annual volunteer recognition luncheon in April 2011. The City’s population had risen to 46,334 that year.

In April 2012, the library shifted to a new computerized check-out and materials handling system called Symphony, which was developed by SirsiDynix. Staff and volunteers began the task of pulling over two hundred thousand items, inserting new electronic codes, scanning them, then putting them back on the shelves. The new system allowed patrons to download a free mobile app on their cell phones and iPads, which let them do searches and pay fees online. The year 2013 saw the library add Zinio, an on-line database of one-hundred sixteen magazines that could be downloaded to a computer or mobile device. It also marked the library’s ninetieth anniversary on March 3, as well as the retirement of Bennie Hicks, Circulation Supervisor and Volunteer Coordinator, after twenty-seven years of service.

In 2015, the CreateIt Technology Lab was established with an eighteen-thousand-dollar grant from the Friends of the Library to allow patrons to do 3D printing, game design, robotics workshops, and other high-tech activities. A second 3D printer was added in 2016.

The library expanded again in 2017 when the Periodical Room was transformed, by an additional 800 square feet, into the new and roomier Teen Zone. The Genealogy Room grew by 700 square feet, as it had grown overcrowded due to generous grants and materials. Library square footage increased from 53,000 to 54,500. Periodicals were relocated next to the Children’s Room on the opposite side of the building.

In 2018 David Coulter retired after thirty years of library service in several capacities, the final position being the Library Manager. The library debuted its new free app, available for Apple and Android devices. Patrons were able to scan and store library barcodes, access the catalog, manage their accounts, download e-books and e-audio, access check-out history, link multiple accounts, and connect to social media. In December, Council approved an ordinance to eliminate extended-use fees and fees for lost library cards, as the monetary benefit from those fees was minimal. The library celebrated its ninety-fifth anniversary with a rotating nine-month display, beginning in March and ending in November, demonstrating how it had progressed each decade since its establishment in 1923. The displays featured library items, documents, and photographs relevant to that decade. Additionally, various programs and events relating each decade’s popular culture were also presented for the public.

In January 2019, Janis Roberson retired as Library Director after forty years of dedicated service to the community. Ruth Chiego became Director in February 2019. Under Ruth’s leadership, Grapevine became the first library in Texas to incorporate a friendly environment for children and adults with sensory needs through a partnership with KultureCity. In September, the library’s mobile library, a project initiated by Mrs. Roberson, became fully operational. Dubbed Grapevine Resources on Wheels (GROW), the mobile library makes visits to underserved areas in Grapevine, encouraging visits to the library.

2020 was a watershed year for the world, as the novel Coronavirus known as COVID-19 emerged and spread, causing global lockdowns and countless efforts to contain and mitigate the disease. The library shut down on March 24, and many employees worked from home, having worked fast to create a virtual workplace in very little time. Many library services had to cease temporarily, such as most foot traffic and in-person programming, while others were modified. Many programs were offered virtually through social media. Patrons were able to place reserves on books and pick them up at the drive-up window. They could apply for virtual library cards and continue to access library databases remotely. On May 4 the library reopened, but with many restrictions in place to maintain as safe and healthy an environment as possible. As conditions improved and vaccinations became available, restrictions were gradually lifted.

In 2021, the library has forged ahead with new programs and services, such as Esports Academy, established with a seventy-five thousand-dollar grant from the Texas State Library and Archives Commission. The new Academy allows gamers and gaming teams to access high-powered equipment, such as gaming computers, laptops, and high-speed data communication. It also offers a collaborative space for team building, learning, practicing, and competing.

The Grapevine Public Library has made tremendous progress since its inception in the early 1920s, working to meet the needs of a growing community with print, audio-visual, and electronic resources, as well as programs and services. With continuing support from the citizens of Grapevine, the Grapevine Public Library will continue to be a vital source of information, recreation, and education to the City well into the future.